A pronoun is a word that is used in place of a noun or another pronoun. Like a noun, a pronoun can refer to a person, place, thing, or idea. The word that a pronoun refers to is called its antecedent.

Pronouns such as we, I, she, them, and it are called personal pronouns. Personal pronouns have a variety of forms to indicate different persons, numbers, and cases.

There are first-person, second-person, and third-person personal pronouns, each having both singular and plural forms.

Each personal pronoun forms has three cases: subject, object, and possessive. Which form to use depends on the pronoun’s function in a sentence.

The following chart shows all the forms of the personal pronouns: 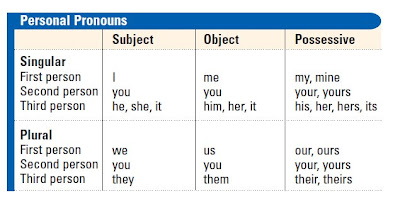 A subject pronoun is used as the subject of a sentence or as a predicate pronoun after a linking verb.

Use a subject pronoun when the pronoun is a subject or part of a compound subject.

A pronoun can be part of a compound subject.

Remember, the most common linking verbs are forms of the verb be, including is, am, are, was, were, has been, have been, can be, will be, could be, and should be.

Direct Object The pronoun receives the action of a verb and answers the question whom or what.

Object of a Preposition The pronoun follows a preposition (such as to, from, for, against, by, or about).

Always use object pronouns after the preposition between.

Possessive Pronouns
A possessive pronoun is a personal pronoun used to show ownership or relationship.

The possessive pronouns my, your, her, his, its, our, and their come before nouns.

The possessive pronouns mine, ours, yours, his, hers, its, and theirs can stand alone in a sentence.