Pragmatics is a branch of general linguistics like other branches that include: Phonetics, Phonology, Morphology, Syntax and Semantics. There are a lot of philosopher and linguists who have tried to define Pragmatics such as Charles Morris’s famous definition of pragmatics as “the study of the relation of signs to interpreters-”, Levinson’s consideration of pragmatics as being “the study of those relations between language and context that is gammaticalized, or encoded in the structure of a language.”, and Mey’s definition as “Pragmatics studies the use of language in human communication as determined by the conditions of society.”. Ran Yongping expressed his idea in his book A Survey of Pragmatics : “Pragmatics is a discipline not only concerning the sense, but also concerning the derivation of sense and the understanding of underlying meaning as its objects. It aims to decipher the negotiation and derivation of meaning in communication. So pragmatics studies, aiming at the derivation of sense during intercommunication, are by-directional dynamic studies.” (Yongping:1998). He put emphasis on dynamic studies, based on the idea of British scholar Thomas, the founder of dynamic pragmatics, who argued that the studies of pragmatics should aim at interactive sense. Language is alive not dead, and it is for using, so only the dynamic studies are significant.
2) Background of Pragmatics:
On mentioning the origin of pragmatics, we can go back to ancient Greek and Roman academic works. At that time some great philosophers had discussed something related to pragmatics. And we can say pragmatics develops from philosophy. Why? First, The term “pragmatics” first appeared in linguistic philosophy in 1930s, for then western philosophers began to shift their focus onto the studies of language symbols, which developed into semiology later. And the early pragmatics was just a branch of semiology that was under the philosophers’ studies, which means that pragmatics originates from the philosophers’studies on language. Second, the theoretic basis for pragmatics is from philosophy. To be more specific, pragmatics originates from the following aspects: the studies of semiology; the studies of linguistical philosophy in the 20th century and the studies of function linguistics on language forms. Third, the main studies of pragmatics such as indecicals and presupposition also have philosophical background. Here we should mention some philosophers who have played very important role in the development of pragmatics. Such as Wittgenstein, Morris, Austin, Searle, Levinson, Leech, Pierce, Carnap and so on. Wittgenstein and Austin once had discussed the origin of pragmatics in England, France and German in 1930s. Morris, who played the most important role in the first stage of the development of pragmatics, held an opinion that the studies of pragmatics must involve the aspects of society, of psychology, of nerve, of culture and of other things that affected the symbols and their meanings. And the most influent thing that he did on pragmatics was that in 1938 he had divided semiology into three parts: syntactics, semantics and pragmatics. The famous philosopher Carnap had very similar ideas with Morris, and he made some supplement, he thought that the studies of pragmatics should on the relationship between users and words as well as the reference of words. And he divided studies into pure theoretic ones and descriptive ones. And he made the aims of pragmatics studies more specific, that is the relationship between language users and words and the reference relationship. Bar-Hiller, the student of Carnap, suggested the studies of pragmatics should have definite aims and he claimed that the definite aims should be decitics such as “I”, “Here”, “Now”. Austin and Searle put forward the Speech Act Theory, which was the most influent topic in the studies of pragmatics during the second stage.
The Most Important Three Issues of Pragmatics and Three Stages in the Development of Pragmatics:
In 1983 Levinson and Leech published their respective works Pragmatics and Principle of Pragmatics, which set up the theoretic system of pragmatics. In 1977 Mey and Haberland started the Journal of Pragmatics in Holand. The start publication of the Journal of Pragmatics, the publishing of Pragmatics and the International Pragmatics Association that was set up in 1988 are considered the most important three issues for the development of pragmatics and indicate that pragmatics has become an independent discipline in linguistics. Generally speaking, the establishment of pragmatics as an independent discipline experiences three stages: the first stage is from the late 1930s to late 1940s, during this period, some philosophers such as Pierce, Morris and Carnap considered pragmatics to be a branch of semiology and all the studies were within the domain of philosophy; The second stage is from the beginning of 1950s to late 1960s. During this period, three famous philosophers called Austin, Searle and Grice made studied on speech act and implicature theory, and their achievements sustained the basic theory of pragmatics. The studies were still within the domain of philosophy then; The third stage is after 1970s, the biggest three issues happened and pragmatics became an independent discipline.
3) Schools of Pragmatics:
The studies of Pragmatics are divided into two big schools------British & American School and European School which can be subdivided into France School, Prague School and Copenhagen School. British & American School is traditionally centering on studying the sentence structure and grammar, and their studies of pragmatics is also restricted to several definite topics such as deictic expressions, conversational implicature, presupposition, speech and conversation structure. Their studies belong to Micro-pragmatics. European School has a wide visual and understanding, and their studies even include conversation analysis, cultural anthropology, social linguistics and psycholinguistics during intercommunication. Their studies belong to Macro-pragmatics.
4) Types of Pragmatics:
There are three divisions of Pragmatics:

When we talk about Micro-pragmatics and Macro-pragmatics, we may ask what are micropragmatics and macropragmatics. Mey have talked about them in details in his book Pragmatics: An Introduction. The studies of Micro-pragmatics are, on the level of language using, centering upon the discussion of pragmatic tasks aroused by the understanding of language symbols’ reference and implicature during conversation, including Context, Conversational implicature, Reference, Pragmatic Principles, speech Acts and Conversation Analysis. While the studies of Macro-pragmatics are, on the level of society & culture, focus on the problems of how to use language for language user during the process of communication, including Pragmatic Acts, Literary Pragmatics, Pragmatics Across Cultures and the Social Aspects of Pragmatics Metapragmatics which can be considered as a review, a survey or a reflection of pragmatics itself, including making statements about itself, questioning itself, improving itself, quoting itself and rethinking the methodologies and theoretic system during the process of its studies. If you want me to say more about Metapragmatics, I can consult what Caffi said: there are three ways of dealing with metapragmatics: one, as a theoretical discussion on what pragmatics is, and what it should comprise; two, as a discussion of the conditions and possibilities that enable people to act by using words, to ’do’ pragmatics by acting pragmatically; and finally, three, as the pragmatic pendant to the metapragmatic level, which is often captured under the label of ‘reflexive language’ .

Labels: based on Mey.2001., Introduction to Pragmatics 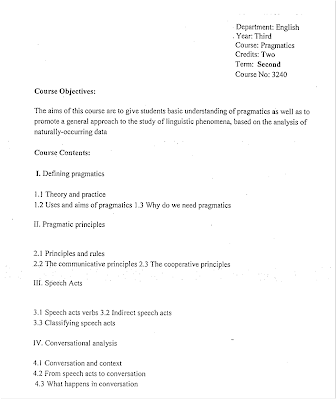 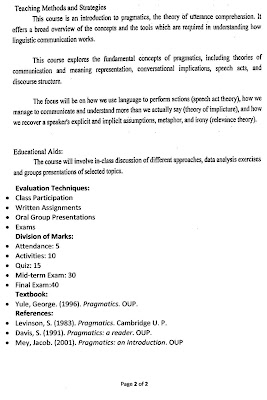 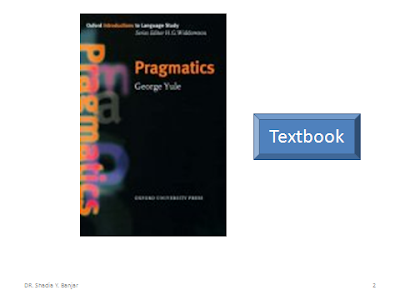 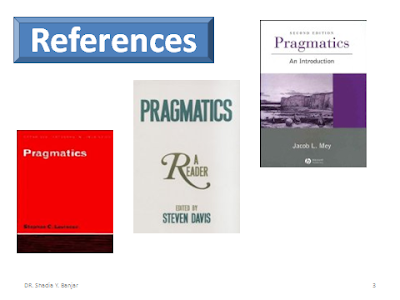