Lecture Notes: What is translation?

What is translation?
DEFINITIONS OF TRANSLATION
Translation is a phenomenon that has a huge effect on everyday life. This can range from the translation of a key international treaty to the following multilingual poster that welcomes customers to a small restaurant near to the home of one of the authors:

How can we then go about defining the phenomenon of ‘translation’ and what the study of it entails? If we look at a general dictionary, we find the following definition of the term translation:

Translation: An incredibly broad notion which can be understood in many different ways. For example, one may talk of translation as a process or a product, and identify such sub-types as literary translation, technical translation, subtitling and machine translation; moreover, while more typically it just refers to the transfer of written texts, the term sometimes also includes interpreting.

This definition introduces further variables, first the ‘sub-types’, which include not only typically written products such as literary and technical translations, but also translation forms that have been created in recent decades, such as audiovisual translation, a written product which is read in conjunction with an image on screen (cinema, television, DVD or computer game).Moreover, the reference to machine translation reveals that translation is now no longer the preserve of human translators but, in a professional context, increasingly a process and product that marries computing power and the computerized analysis of language to the human’s ability to analyse sense and determine appropriate forms in the other language.

Our threefold definition of the ambit of translation will thus be:

Based on: Basil Hatim and Jeremy Munday (2004). Translation, An advanced resource book . Routledge.

Welcome to LANE 350 " Introduction to Translation” 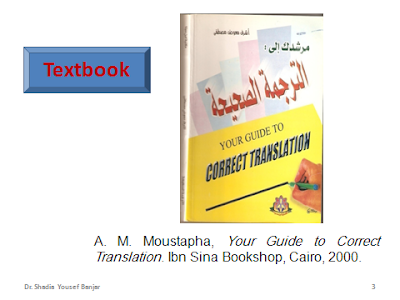 1. Highlighting the importance of translation with special reference to the transference of technology and modern advancements in scientific disciplines;
2. Reviewing the different types and schools of translation; and
3. Introducing major problems confronted by the translator: cultural and linguistic.
The course aims to:

This introductory translation course offers students an overview of translation theory while providing practice with a variety of texts. Emphasis is given to rendering translations from English into Arabic language and vice versa in different topics related to translation practices. Basic concepts and problems in the area of Translation Studies are identified and discussed . Various modes and types of translation as well as translation strategies and techniques are also discussed. Students are familiarized with the role and functions of translator/interpreter in the process of intercultural communication.

The course has both a theoretical and practical components. Theoretical issues are illustrated by specific examples; and practical exercises are built around them. The course offers practical approaches to translation. It is based on topic areas, incorporating study of different text-types, style, use of dictionaries, text comparison, collocation, equivalents and practical hints and tips. The Internets is used both as text resource and as translation tool.

The course is a foundation as well as language-specific training in translation.

By the end of the course students should have a basic level of competence which will enable them to take on translation work with confidence.

The class format is a combination of PowerPoint presentation and group discussion. The class deals with linguistic and cultural problems which are involved in the process of translation/interpretation common to most language pairs. 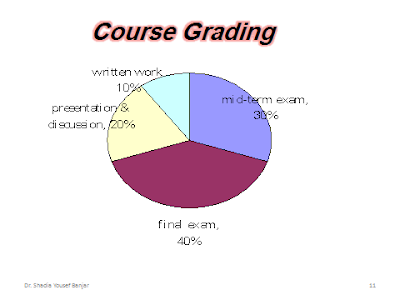 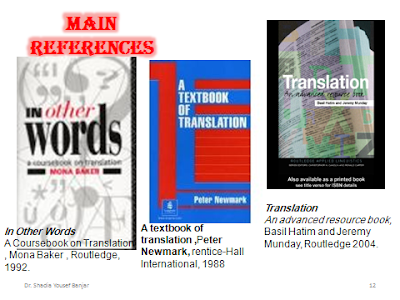