Words
A. Definition of “word”:
• Words are genuine linguistics units.
•In written texts, words are recognized by the white spaces between them.
•In linguistic analysis, we are interested in spoken words.
•“A word’ is a free morpheme or a combination of morphemes that together form a basic segment of speech” . Norman C. Stageberg
“A word is…any segment of a sentence bounded by successive point at which pausing is possible”   Charles F. Hockett.
Words can be identified by the pauses between them:

B. Simple and Complex Words:
•English words may be classified on the basis of the kinds and combinations of morphemes of which they are composed. 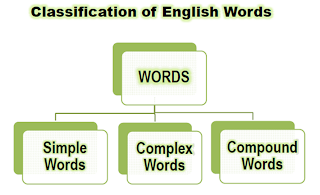 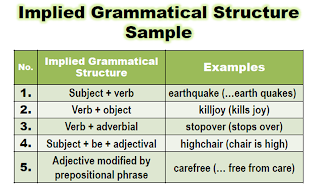 P.     Phonesthemes
“The word phonestheme is, a blending of phoneme and esthetic, indicating quite elegantly the tendency of certain sounds to acquire esthetic or emotional connotations.”
(Verbatim: VERBATIM: The Language Quarterly Vol XIII No 3)
Phonestheme : a sound that, because it appears in a number of words of similar meaning, has a recognizable semantic association.
Nordberg (1986) wrote ‘‘Sound symbol or phonestheme ... is the synesthetic combination of a certain sound or sound sequence with a particular notion or a particular connotative content.’’
Jakobson and Waugh (1979) defined sound symbolism as ‘‘an inmost, natural association between sound and meaning’’.
Malkiel (1994) used the term phonosymbolism to mean the same as sound symbolism.
What exactly is the relation between phonesthemes and morphemes?
Are phonesthemes really morphemes or are they something different?
The most common definition of a morpheme is ‘‘a minimal meaning carrying unit’’
Bolinger, 1965 defined the term phonestheme as ‘‘the grouping of similar meanings about similar sound’’.
Åsa Abelin, 1999, used the term phonestheme to mean bound submorphemic. 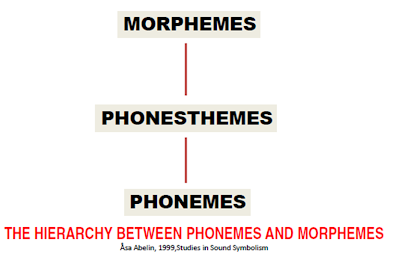 •Phonesthemes are sounds that in themselves express, elicit, or suggest meaning.
_ Example: the meaning of two Chinese words
ching = heavy
chung = light
•The vowels in these words elicit the meaning.
• These vowels are called phonesthemes.
In English, the most common phonesthemes are the pair of high front vowels /i/ and /Ι/, suggesting smallness : peep, squeak, ping, bit. 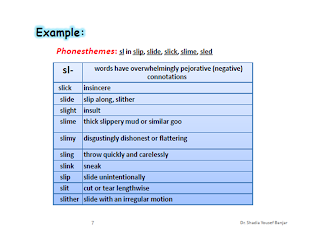 It is important to note that phonesthemes do not meet all the conditions that qualify a morpheme. Thus, they are considered a different linguistic feature or as Åsa Abelin, 1999, considered “bound submorphemic” .
Source:
Stageberg, Norman C. and Dallin D. Oaks (2000). An Introductory English Grammar , Heinle, Boston:USA.
﻿
Posted by Dr. Shadia Y. Banjar at 5:24 PM