K.  Immediate Constituents
The Structure of Words:
There are two levels for word- structure: the level of morphemic analysis and the level of derivational or word-formation analysis. The morphological analysis of word- structure on the morphemic level breaks up the word into its constituent morphemes.
• A word of one morpheme, like blaze, has, of course, just one unitary part.
• A word of two morphemes, like cheerful, is obviously composed of two parts, with the division between them:

• A word of three or more morphemes is not made up of a string of individual parts;
• It is built with a hierarchy of twosomes.
•As an illustration, lets us examine the formation of gentlemanly, a word of three morphemes:
• gentle and man were put together to give gentleman.
• We see that the meaning of gentleman is a composite of these of its two constituents.
•Now we add –ly, meaning “like”, and get gentlemanly, like a gentleman.
• Now, when we analyze a word we show this process but in reverse.
•We usually divide a word into two parts of which it seems to have been composed.

• Words are formed in steps; they have a special type of structure characterized as hierarchical.
•This hierarchical structure can be schematically represented by means of tree diagrams that indicate the steps involved the formation of the word.
Immediate Constituents: 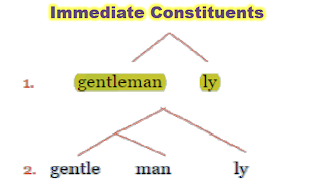 •In doing word diagrams like those above to show layers of structure, we make successive divisions into two parts, each of which is called an Immediate Constituent, abbreviated as IC.
•The process is continued until all component morphemes of a word, the ultimate constituents, have been isolated. 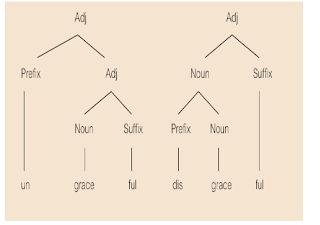 Recommendations on IC division:
Here are three recommendations on IC division:
1. If a word ends in an inflectional suffix, the first cut is between the suffix and the rest of the word.
2. One of the ICs should be, if possible, a free form.
3. The meaning of the ICs should be related to meaning of the word.
• some words are ambiguous in that they have more than one meaning.
• When we examine their internal structure, we find out that they may be analyzed in more than one way. 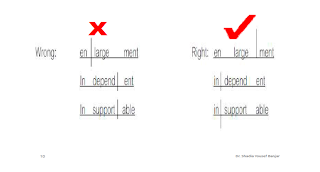 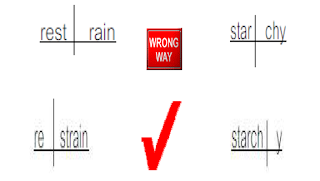