Inflectional Paradigms
What is a paradigm?
A paradigmis the complete set of related word-forms associated with a given lexeme. A paradigm is a set of related forms having the same stem but different affixes.
Example:
·         a derivational paradigm with the stem head:
ahead, behead, header, headlong, headship, heady, subhead.
•Paradigms are also defined by the grammatical distinctions which a language chooses to code morphologically.
Example:
·         Nouns in English have to be inflected for NUMBER.
Paradigms are the devices used by structuralists for establishing word classes in English considering the ways in which certain types of words can be grouped into sets, called paradigms, on the basis of the inflectional and derivational affixes (prefixes and suffixes) that they will take. 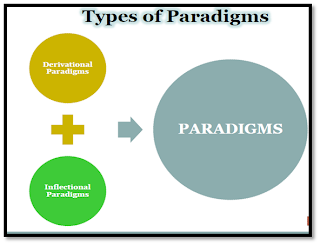 • A derivational paradigm is a set of related words which have the same root but different stems.
Examples:
1. nature, natural, naturally
2. unnatural, unnaturally
3. naturalist, naturalistic, naturalistically
4. naturalize, naturalization
• An inflectional paradigm is a set of related words consisting of the same stem to which different inflectional suffixes have been added.
Examples:
1. brighten, brightens, brightening , brightened, brightened
2. great, greater, greatest
3. boy, boy’s, boys, boys’
•The inflectional paradigm is formed by words to which the inflectional suffixes are attached.
•   As far as stems are concerned, we can say that the stem of the word is that part of the word which remains when the inflectional suffix is removed.
• Some authors refer to the stem as the base of the word.
• There are three types of stems:
1.      Simple stems are identical to the root: run, tree, room, chair
2.      Derived stems consist of a root and one or more derivational suffixes: freedom, motherhood,   anticapitalism
3.       Compound stems consist of two or more roots: blackberry, airplane, day-care

AN INFLECTIONAL PARADIGM is a set of related words composed of the same stem and all the inflectional suffixes that can go with this stem. 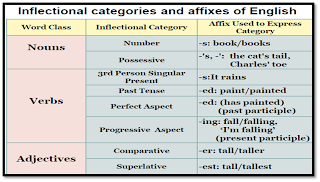 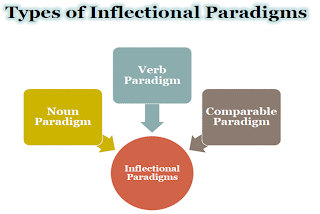 Nouns may be categorised in terms of number (singular or plural) and case (possessive or not). Nouns only take the genitive case clitic –’s.
A paradigm for all the forms of a noun is called a declension, and to write a paradigm for a particular noun is called declining the noun. Here is an example of the declension of the words: stone, ox, and man.

• The four-form paradigm is maximal: not all nouns have the four forms.
• many nouns do not take the possessive forms because an of structure often takes the place of {-s ps} the morpheme.15 10/26/2011
Example:
“The ceiling of the room” – is more likely to be used than - “the room’s ceiling” .

Some collective nouns, may be either singular or plural in meaning when they are singular in form such as tribe, team, faculty, family.
Examples:10/26/2011
• The family (the unit) is sitting at the dinner table.
•The family (the individuals) have gathered from many parts of the country. 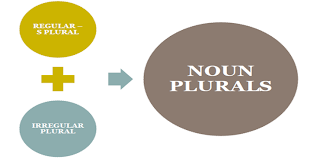 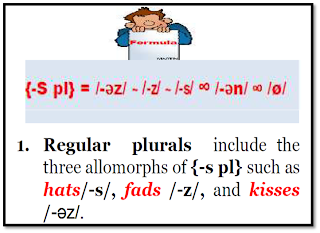 {-s ps} vs. ‘of structure’:
There is a tendency to use the inflected form with animate nouns; thus, ‘the dog’s leg’, but ‘the leg of the table’. 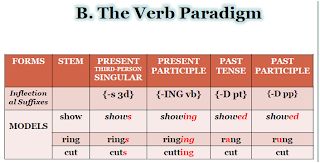 The Verb Paradigm:
•Verbs have five forms.
•Each of the five forms has its own uses:
1. The stem (base form) : occurs after to and modals, indicating simple present tense with all person except 3rd person singular, and indicating imperative mood.
2. The present third-person singular : {-s 3d} used with he, she , it or nouns which these pronouns will substitute.

1.   The past tense: {-D pt} has regular and irregular forms indicating SIMPLE PAST TENSE.

Suppletion
A total change in the paradigm is called suppletion.
• Consider the verb ‘go’
• The entire stem /go-/ has been replaced by a wholly different stem /wɜn-/.
• The suppletion can be expressed by this formula : /wɜnt/ = /go > wɜn/ + /t/.

Suppletion is the allomorphy that is produced by retrieving from the lexicon different phonological forms of the morpheme in question. A noticeable case is the verb be in English, which has the suppletive forms am, are, is, was, and were, as well as be, being, and been. Originally suppletive forms were those which were ‘supplied’ to fill in for missing forms of a root in a ‘defective’ (i.e., incomplete) paradigm. Under that definition, am, is, are, was, and were are suppletive with respect to be, but been and being are not. (David Tuggy ,1997)
It would be quite odd to posit a phonological rule to derive, for example, /ӕm/ from /bi/, or vice versa, or both of them from a third form; they are clearly not phonologically-related forms. Thus, it is normally assumed that forms such as ‘am, are, is, was, were, and be’ are lexically stored. It is also generally assumed that a form like being, since it is predictable from the combination of be with the suffix -ing, is not stored. A suppletive allomorph’s use may be conditioned by grammatical context (e.g., am occurs in present tense with first person singular subject). David Tuggy, 1997 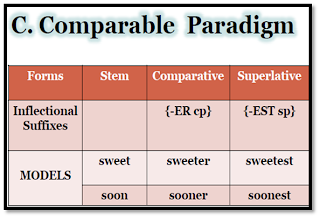 Other adjectives and adverbs usually take the preceding more or most instead of –er/-est.
Some adjectives have suppletive (irregular) forms in the comparative and superlative such as ‘good’:  _ better/bɛtǝr/=/gʊd>bɛt-/+/ -ǝr/
_ best /bɛst/ = /gʊd > bɛ-/ + /-st/

Conclusion
In all inflectional paradigms, the stem remains constant.
• The suffixes produce the difference in meaning among the forms of each paradigm.10/26/2011
• Membership in one of these inflectional paradigms is considered a signal which enables us to group words into four lexical classes: nouns, verbs, adjectives, and adverbs.